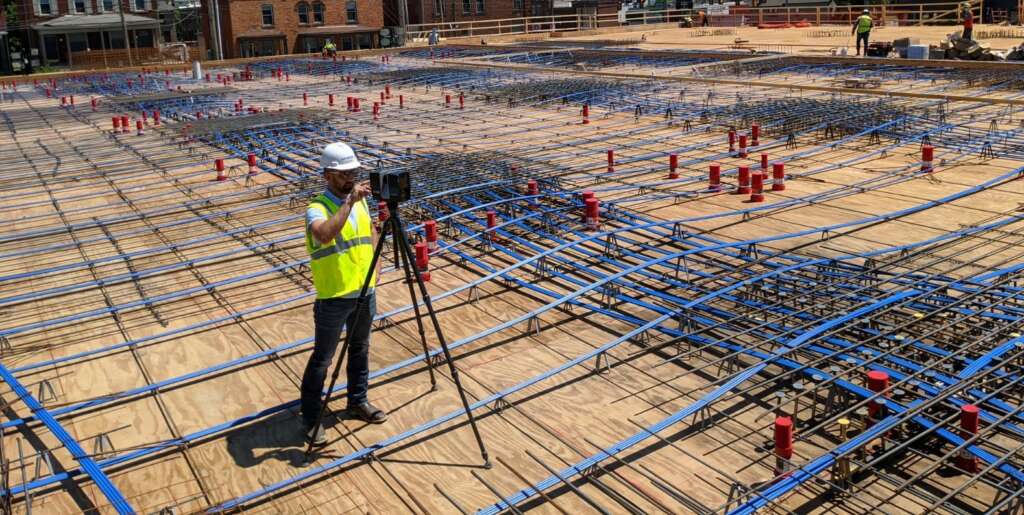 Staying ahead of the curve in a competitive building market is important now more than ever. Marker Construction has invested in laser technology as a means of quality control to improve efficiency and safety on job sites. These state-of-the-art 3D laser scanners and accompanying equipment can provide accurate models and panoramic images and data of the existing buildings or spaces, known as reality capture. These scans offer Marker a link between the built and virtual worlds.

Laser scans provide the benefit of an accuracy that was once never before possible. Project conditions can be recorded down to one-thirty-second of an inch, allowing for models to be created from the scans, reducing the risk of common errors and obstacles often encountered, such as plumbing and piping inserts or installation of steel.

When a scan is taken, it captures millions of points where data was captured. These data points are then overlaid onto a computer model of the design. According to Kevin Gosche, Virtual Design & Construction Manager at Marker, Inc., “We can get incredibly accurate data using our scans, which can be relied upon for building design.”

Laser scans, in the long run, require fewer workers and increase productivity and safety. With this technology, Marker has improved the quality of work while decreasing the time it takes to install, just by knowing the environment in which we are working. “What was recently an expensive and sparsely-used technology has now become commonplace in Marker’s building process,” Randy Marker, CEO, said.