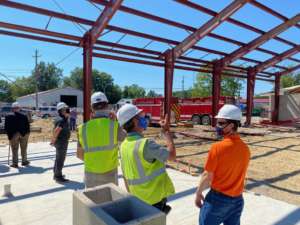 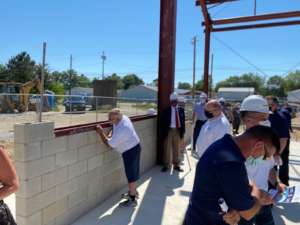 Wednesday, July 1, officials of the City of Vermilion hosted a brief “Topping Out” ceremony for the new Vermilion Firehouse 1. The $4 million project is currently under construction at the corner of Douglas Street and Devon Drive.  The ceremony featured an opportunity for attendees to sign a piece of the structure and watch as it was lifted into place – marking the completion of the framing of the 15,970 square-foot building.

The original Firehouse 1, located on Ohio Street on the west side of the City, is one of two fire stations belonging to the Vermilion Fire Department. Firehouse 2, on Overlook Drive, is on the east side of the City. Due to Vermilion’s travel obstacles as well as its size, it’s essential to maintain two stations for fast response times.

The current Firehouse 1, built in 1954, has two dead-end bays with low ceiling heights, which are insufficient to house their vehicles by today’s standards. Discussions of building a new Firehouse 1 began in 2017. Marker Construction of Columbus, Ohio, was chosen as the Design-Builder in 2018 through a qualifications-based selection process. Marker has an extensive history of successful firehouse projects, having designed and constructed over 40.

In conjunction with Poulos & Schmidt Design, Marker virtually designed the state-of-the-art building using a three-dimensional computer modeling software. The use of this software helps to visualize and coordinate construction before beginning work, significantly improving the project’s quality and speed.

Construction of the new firehouse began in early April 2020. Thanks to the hard work and efforts by an all-local subcontractor workforce, the project is currently under budget and ahead of schedule, on track for completion in December 2020.

“This building is in a real sense an investment in ourselves,” Mayor Forthofer said. “It invests in what’s good about this town and helps our volunteer firefighters keep us safe. When we convene again, it will be at the dedication of this facility and we will have done something that we should be proud of for future generations of Vermilionites.”

For more information on the Topping Out Ceremony, follow the links below: